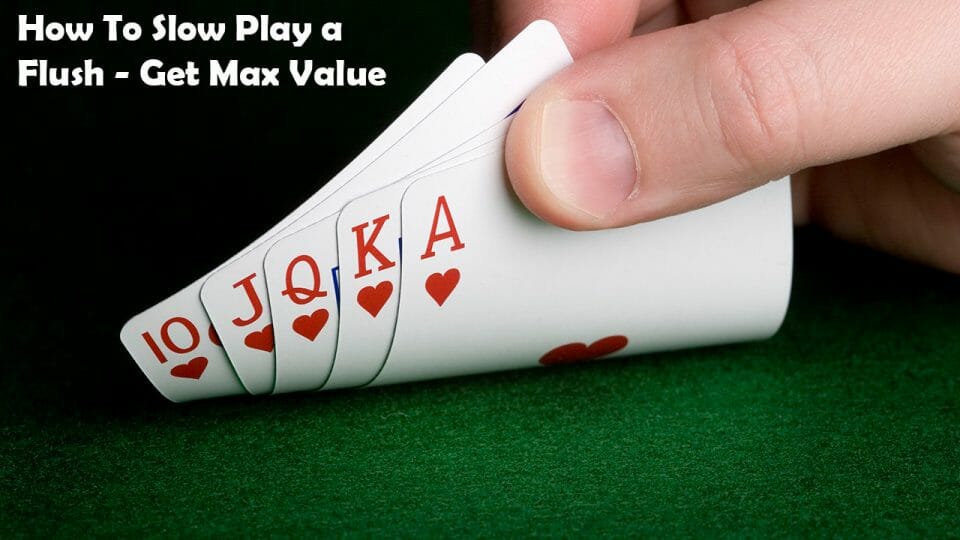 Learning the right way to play and bet a flush is crucial in poker. Sometimes disguising your hand can help you get paid off in a big way. Other times playing your flush strong can also work out. Over the years I’ve found that slow playing this type of hand will win you a lot more money in the long run. Let me explain further.

Okay. So I was in a six-person cash game here. This was a real money session. I started with $500 on Bovada. So if you guys do want to get started playing somewhere I would definitely recommend checking out Bovada. They’re a great place to play. Now, $2/$5 no limit are the blinds I was playing which are pretty high stake. Once you get past $2/$5 it’s $5/$10 and then $10/$20 on Bovada. 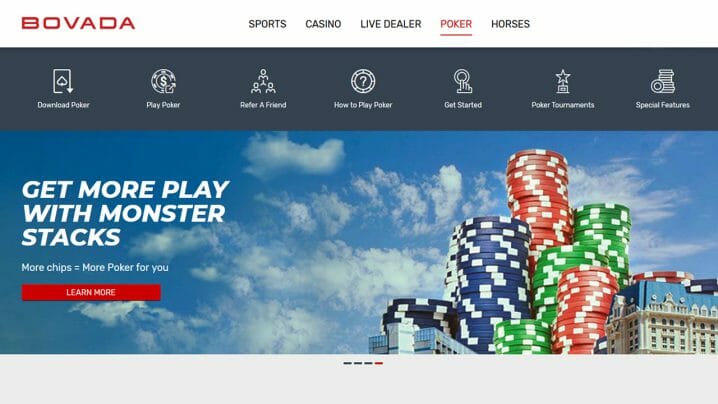 Now the cool thing about Bovada, too, is they’re very reputable. They’ve been around for a very long time, close to a decade. But they’re also backed by Bodog gaming, which has been around for over 20 years. So, I mean, the reputation is there. They also have fast cash outs here. But I love this software. So you can actually change the color of tables, card decks. And I’ve always been a fan of this software. They do have anonymous screen names on here, so you’re not going to know who you’re playing against, which is okay because no one can track you. 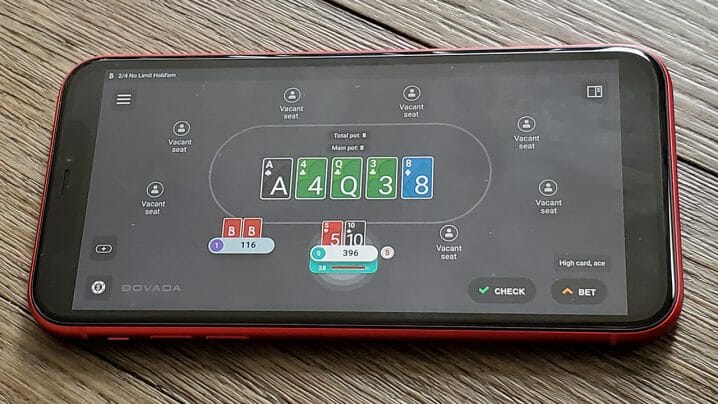 No one likes a bluffer fish! So as I continue talking about how to slow play a flush correctly I want to give you a bit of strategy as well.. I think that if there’s anything that I had to point out about myself, I feel like I bluff too much. There’s times when you get in a hand that you really just can’t bluff your way out of it. And sometimes you have to accept the fact that you should just check it down and just lose whatever’s in there, because people aren’t stupid. They’re going to pick up on what you’re trying to do. So sometimes it’s better just to lose a hand than to try to bluff off 25% or 50% of your stack. 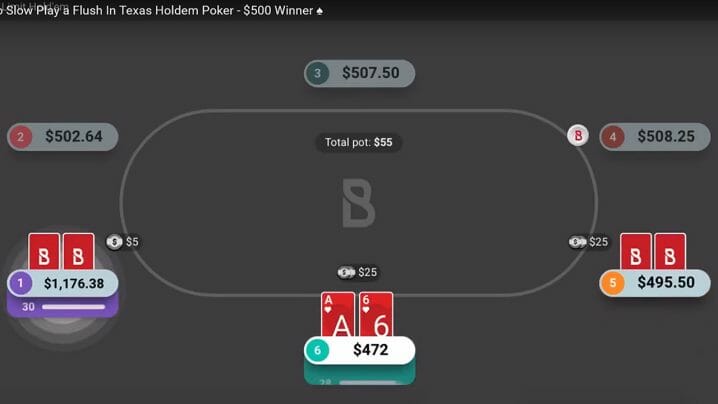 Okay, so my money hand was an ace six of hearts. I feel like I played the hand pretty well mainly because I decided to get a bit tricky. Anytime you get an ace suited combination you always want to see a flop. You know what I mean? Because you never know what’s going to happen. So I tend to limp into hands with ace combinations suited. It doesn’t matter what it is. It could be ace three suited, ace four, ace seven, ace eight. I’m definitely going to limp into a hand, not necessarily raise. But I always try to get in with an ace combination. 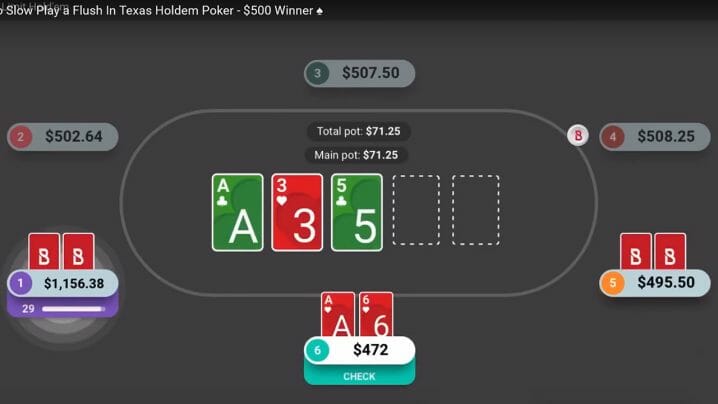 All right. So Player Five raised it to $25. I didn’t really hesitate. I just flat called it. Player one also made the call which brought us to the flop. All right, so we got an ace, three, five here. Now, obviously not the greatest flop for ace six. Obviously a lot of hands beat me right now. But everybody checked and that turn card changed this hand. The turn card gave me an up and down straight draw with the ace. Two pair could also be good here as well. And then of course we’ve got the money flush draw. 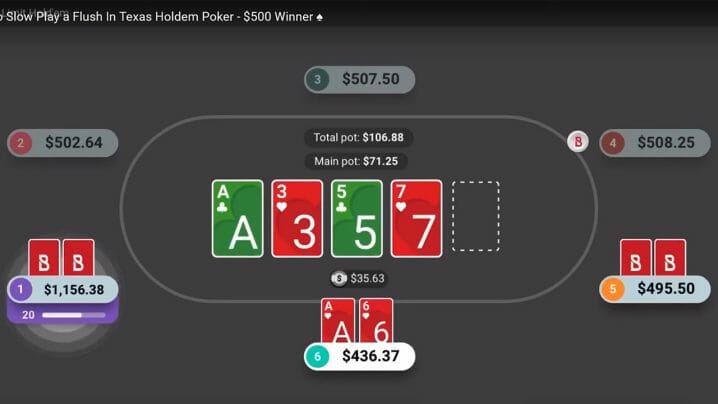 So this is exactly how I slow played my flush. The river card here was a five of hearts. We got the flush! But if anybody had a set, which I didn’t think they had, we would not be in good shape here. Now, Player One is going to put in a pretty big bet. And like I said, I didn’t put anybody on a full house in this hand at all. So I’m not worried about a full house. Player one decided to bet around $100 on the river. So I had to make a decision here. And my decision was that I could obviously flat call or get it all in right here. Since I didn’t put him on a full house, I decided to shove it. And player one basically instant called. He’s going to turn over a jack deuce suited. So I don’t blame him for making that call. I mean, it was a tough beat. But honestly, that’s why I like to limp in with those ace suited hands, because sometimes it pays off and it really did there. 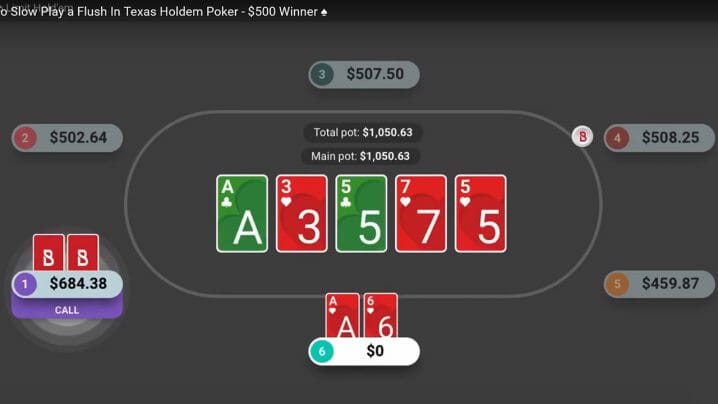 Well that’s exactly how you slow play a flush for max value. Sometimes you have to get tricky with your opponents and make yourself look weak. Also if your currently looking for a solid place to play texas holdem online right now we definitely recommend checking out Bovada. Good luck at the tables!

Does Ignition Poker Have Freerolls?