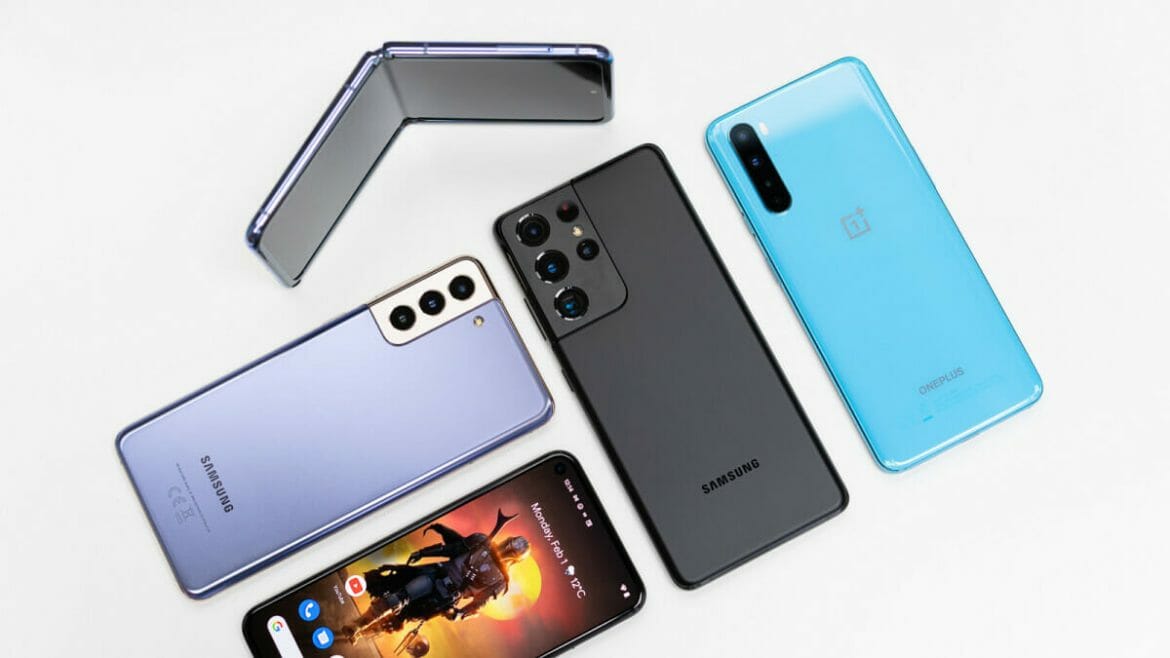 They combine good specs with relatively low cost, providing the best value. Some even have flagship-level specs in some areas that are usually offset by a basic design or average secondary cameras to keep the price down. They are usually way better than budget phones in terms of camera quality, better screen, a faster processor, and better design. Below are five of the best mid-range phones you can purchase. 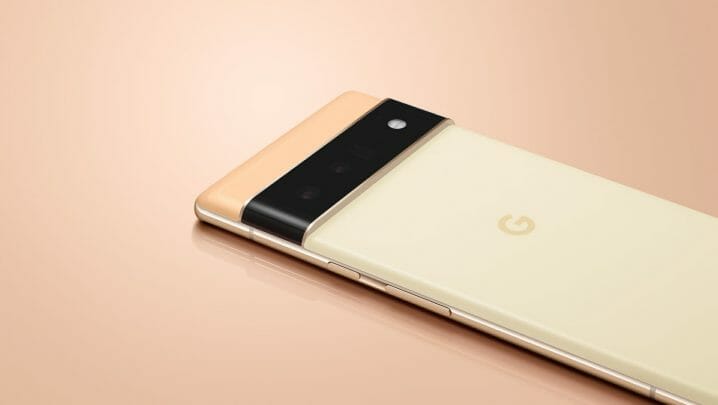 Google released the Pixel 6 smartphone in October 2021. This phone features the new octa-core Google Tensor chip, a chip built specifically for the Pixel and reputed to make the Pixel 6 80% faster than the Pixel 5. Its camera system is top-notch, with 50MP wide and 12MP ultra-wide lenses. The camera also has a dual-LED flash. The selfie camera is an auto-HDR 8MP wide camera.

It has a glass body and weighs 207g(7.30 ounces). Its AMOLED screen measures 6.4 inches with a 1080 x 2400 resolution and 90Hz refresh rate. The Pixel 6 comes with stereo speakers but without a headphone jack. It also comes with a non-removable Li-ion 4616mAh battery. The Pixel 6 charges 30W with wired charging and 21W with wireless charging. It has a USB C port. 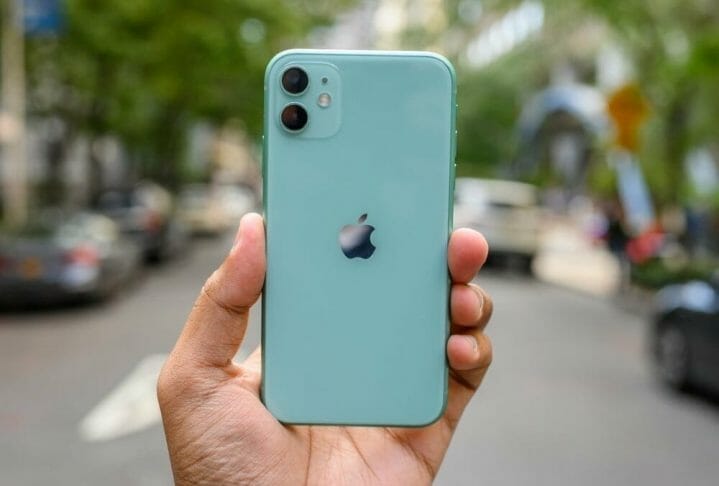 iPhone 11 will be three years old this September; however, it is still a phone you might want to own, especially if you are on a tight budget. The phone is built with a glass body over an aluminium frame. It has an oleophobic 6.1 inches LCD display with an 828 x 1792 pixels resolution. The display is covered with scratch-resistant glass.

iPhone 11 comes with iOS 13 but can be upgraded to iOS 16. It uses Apple’s A13 Bionic hexa-core mobile chip. It has a dual primary camera comprising a 12MP 26mm wide lens and a 12MP 13mm ultrawide lens. It also comes with a dual-LED flash. The selfie camera is also 12MP with depth and biometric sensors. 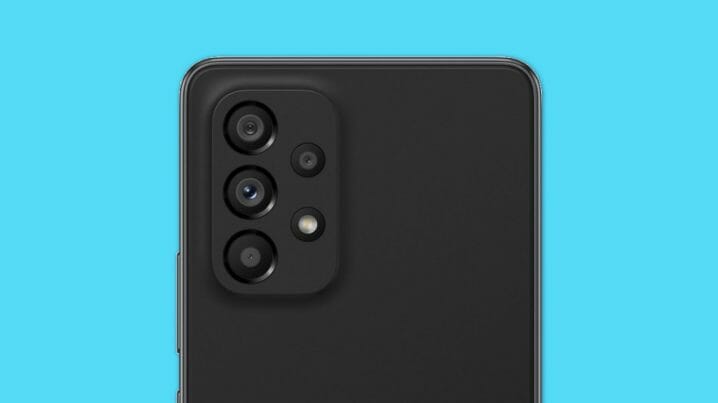 The Samsung A53 is the newest phone on this list. It was released in March 2022. It features a 6.5 inches Super AMOLED screen with a 120Hz refresh rate and a 1080 x 2400 pixels resolution. It has a glass front and a plastic back. It has a nano-SIM slot and another slot for either a SIM or a microSD.

The A53’s primary camera has four lenses. A 64MP main lens, a 12MP ultrawide lens, and 5MP macro and depth lenses. The camera has LED flash and HDR. It also has a 32MP HDR selfie camera. It has great-sounding stereo speakers but no headphone jack. The fingerprint sensor is under the display.

Samsung A53 runs the Android 12 OS. It is powered by the Exynos 1280 octa-core processor. A53’s battery is a whopping 5000mAh non-removable Li-Po battery. It has a decent charging speed of 25W but no wireless charging capability. The phone comes in black, blue, white and peach colours. Samsung A53 comes with 4, 6 or 8GB of RAM. Storage space also varies between 128GB and 256GB. The price starts at around $315. You can check out the latest pricing on the A53 here. 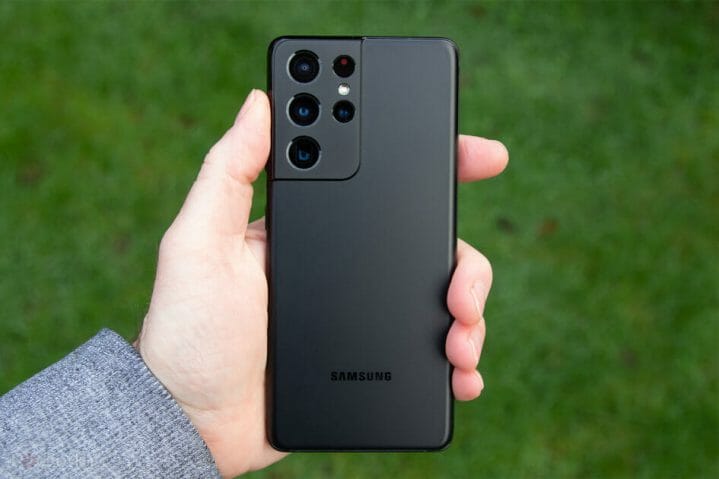 The Samsung Galaxy S21 was released in January 2021 as Samsung’s flagship; however, it has since been replaced by the S22 Ultra. The Galaxy S21 has a glass and plastic body built over an aluminium frame. It features a 6.2-inch dynamic AMOLED, 120Hz refresh rate, and 1080 x 2400 resolution display.

Its main camera is made up of three lenses. The first is a 12MP wide lens, followed by a 64MP telephoto lens with 3x hybrid zoom and a 12MP ultrawide lens. Other features of the camera include LED flash and auto HDR. The selfie camera is an auto HDR 10MP wide camera. It has no headphone jacks. Also, the USB port is a Type C 3.2.

The S21 runs the Android 11 OS. It is powered by an octa-core Exynos 2100 processor for the international model and an octa-core Snapdragon 888 processor for the US and China model. S21s battery is a decent 4000mAh. It charges at 25W with wired charging, 15W with wireless charging, and 4.5W for reverse wireless charging. It also does not come with an SD card slot. All variants have an 8GB RAM processor, while storage space varies between 128GB and 256GB. The Galaxy S21’s price starts at $377 for the 128GB variant. You can check out the latest pricing on the Galaxy S21 here. 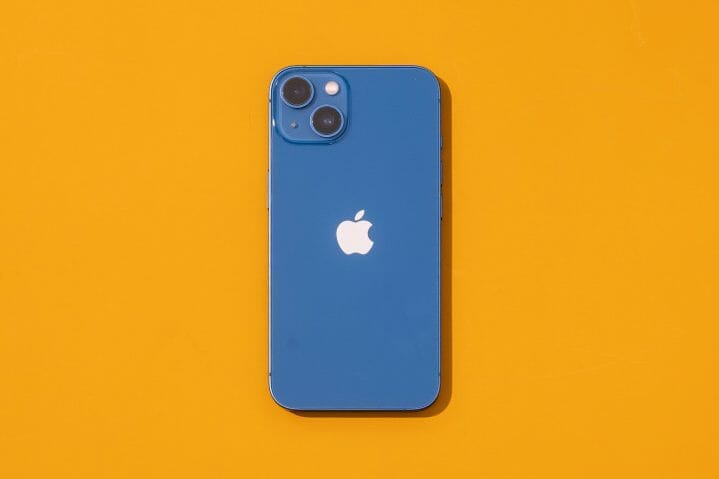 iPhone 12 was Apple’s flagship when it was released in October 2020. It has a glass body built on an aluminium frame. The screen is a 6.1-inch Super Retina XDR OLED with 1170 x 2532 pixel resolution. The screen is oleophobic and scratch-resistant.

iPhone 12’s primary camera has dual 12MP lenses, one wide and one ultrawide. The camera’s other features include a dual-LED flash and HDR. The selfie camera is also 12MP with HDR. The phone has stereo speakers but no headphone jack. iPhone 12 does not have a fingerprint sensor; Face ID is used to unlock the phone.

The iPhone 12 is powered by the hexa-core A14 Bionic chip. It also runs on iOS 14.1 and can be upgraded to iOS 16. The battery is a non-removable 2815mAh Lithium-ion battery. Charging speeds reach up to 20W with wired charging, 15W with MagSafe wireless charging and 7.5W with Qi wireless charging. iPhone 12 comes in black, blue, purple, white, red and green colours. All variants have a 4GB RAM processor, while storage space ranges between 64GB and 256GB. The price starts from $450. You can check out the latest pricing on the iPhone 12 here.

All the phones on this list cater to various preferences. They all offer great value for a fair price. For those that want light, compact smartphones, iPhones 11 and 12 are the obvious choices. For those that prefer big screens, Samsung Galaxy A53 fits the bill. People who want a smartphone with a large battery would like the Samsung Galaxy A53 and the Google Pixel 6; S21 also has a decent battery. All the phones on the list have excellent cameras that will fit the needs of average users.